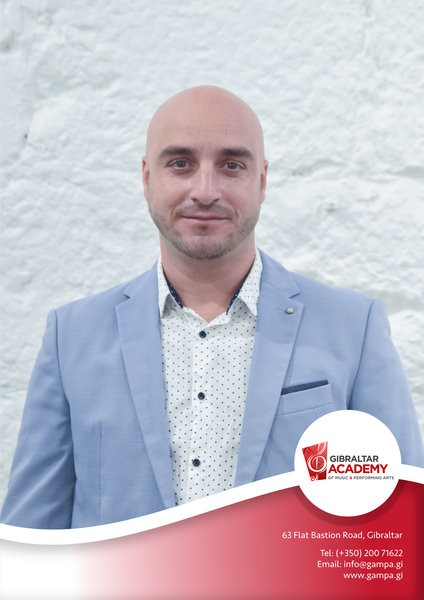 Christian completed his BA(Hons) in Contemporary Arts at Nottingham Trent University, where he specialised in Music and Performance.  He later trained at the prestigious Mountview Academy of Theatre arts in London where he obtained a PG Dip in Acting and Musical Theatre in 1999.  Christian’s performance experience includes Channel 4, BBC, DWPA Productions featuring in an original Musical “Anything to Stay Young”, Madam Butterfly at Holland Park, Sun Cruises as well as working for Disney Entertainment between 2000 and 2007. He is also featured in the original cast recording of “Anything to Stay Young” as well as multiple recordings for London-based Orchestral Group Tonic Fold.

Santos Productions Academy became the Gibraltar Academy of Music and Performing arts where the students will now continue their education in Music and Drama.

Christian has worked closely with HMGOG and The Parasol Foundation in order to offer Scholarships to make music education more affordable.  He also brough to Gibraltar the acting exams and rock and pop music exams with Trinity College offering them locally to students and recently becoming a centre for the region.

With a fantastic team behind him, Christian hopes to continue developing the academy and make it a community of young artists.